When discussing the careers of women leaders, there’s a phenomenon referred to as the “glass cliff.” It’s an obvious relative to the term glass ceiling, which describes the invisible barrier to advancement that women often face when they are up for promotion to the highest levels of an organization. The “glass cliff” describes the idea that when a company is in trouble, a female leader is put in charge to save it. When women are finally given a chance to prove themselves in a senior position, they are handed something that is already broken and where the chances of failure are high.

We see this happen frequently enough that it made us wonder, are women in fact more qualified to lead during a crisis? Could that be why they are handed the reins when times are tough?

During the Covid-19 crisis, we’ve heard anecdotally about women leaders doing a better job and new research backs that up. One study found that outcomes related to Covid-19, including number of cases and deaths, were systematically better in countries led by women. Another looked at governors in the U.S. and similarly found that states with female leaders had lower fatality rates. We decided to look at our global database of 360-degree assessments to see if we saw any patterns in how male and female leaders inside organizations are reacting and responding to the crisis.

Who’s Seen as More Qualified to Lead in a Crisis?

Last year, we wrote about how women were rated better leaders by those who worked with them when compared with men. The data for our analysis was pulled from assessments of over 60,000 leaders (22,603 women and 40,187 men). We wanted to look at similar data gathered during the first phase of the Covid-19 crisis to see if these ratings had changed.

Between March and June of this year, 454 men and 366 women were assessed on their leadership effectiveness using our Extraordinary Leader 360-degree assessment. Consistent with our pre-pandemic analysis, we found that women were rated significantly more positively than men. Comparing the overall leadership effectiveness ratings of men versus women, once again women were rated as more effective leaders (t-Value 2.926, Sig. 0.004). The gap between men and women in the pandemic is even larger than previously measured, possibly indicating that women tend to perform better in a crisis. 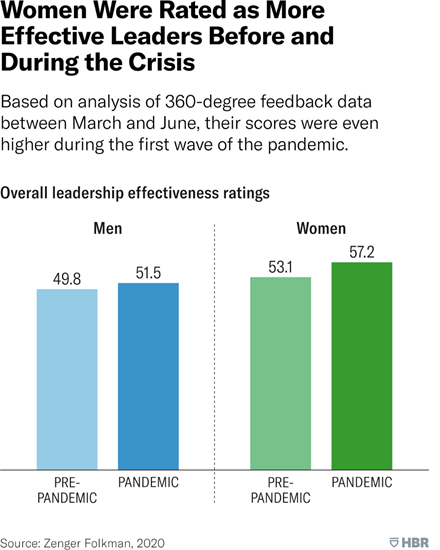 In the table below, percentile scores for men and women are displayed sorted by the average rating for women based on data gathered in the first wave of the pandemic. Why Are Women Leaders Seen as More Effective? To better understand what was driving the difference in engagement levels, we looked at the competencies that direct reports ranked as most important during the crisis. Notably, respondents put greater importance on interpersonal skills, such as “inspires and motivates,” “communicates powerfully,” “collaboration/teamwork,” and “relationship building,” all of which women were rated higher on. Our analysis echoes what the researchers found in the study mentioned above about U.S. governors: that female leaders expressed more awareness of fears that followers might be feeling, concern for wellbeing, and confidence in their plans.

Perhaps the most valuable part of the data we’re collecting throughout the crisis is hearing from thousands of direct reports about what they value and need from leaders now. Based on our data they want leaders who are able to pivot and learn new skills; who emphasize employee development even when times are tough; who display honesty and integrity; and who are sensitive and understanding of the stress, anxiety, and frustration that people are feeling. Our analysis shows that these are traits that are more often being displayed by women. But as the crisis continues, and intensifies in many places, all leaders, regardless of gender, should strive to meet those needs.