In South Africa we have a separate, special celebration for women. National Women’s Day falls on 9 August.

It is a public holiday and it specifically seeks to celebrate women in society’s contribution to achieving freedom in South Africa – more specifically, to commemorate the actions of women in 1956 to contribute to SA’s drive for freedom and equality. 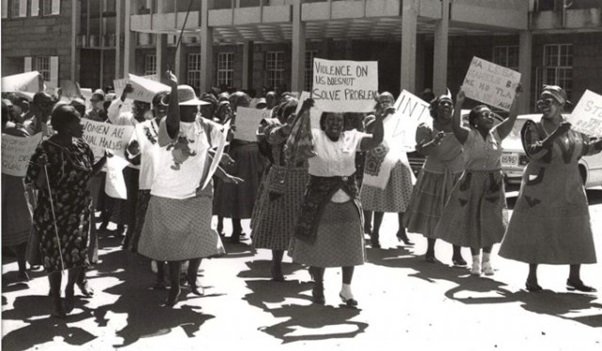 Women march in Lesotho during a past National Women's Day protest

It is slightly different from the UN’s International Women’s Day, celebrated on 8 March every year. Here is what Women’s Day in South Africa is all about:

To rise up against the legislation that required black South Africans to carry the "pass" (special identification documents which infringed on their freedom of movement during the Apartheid era), on 9 August 1956, approximately 20 000 women from all over the country took to the streets of Pretoria – many carrying the children of their white bosses on their backs – to stage a peaceful march to the Union Buildings.

The women left 14 000 petitions at the office doors of prime minister J.G. Strijdom. The women stood silently for 30 minutes and then started singing a protest song that was composed in honour of the occasion, “Wathint' Abafazi Wathint' imbokodo!” (Now you have touched the women, you have struck a rock).

In the years since, the phrase (or its latest incarnation: "you strike a woman, you strike a rock") has come to represent women's courage and strength in South Africa.

The role of women in shaping SA society

An inspiring display of political strength, female solidarity and inner fortitude, the march on August 9, 1956, is both a reminder of the great women who helped mould South Africa and the trailblazing women who continue to lead the country forward.

Due to this public holiday, there have been many significant advances. Before 1994, women had low representation in the Parliament, only at 2.7%. Women in the national assembly were at 27.7%. This number has nearly doubled, being at 48% representation throughout the country's government.

National Women's Day draws attention to significant issues women still face such as domestic violence, sexual harassment in the workplace, unequal pay, etc. It can be used as a day to fight for or protest these ideas.