This was a question from Christine Lagarde, President of the European Central Bank, at a 2015 conference, talking about the collapse of the financial institution which in part ignited the 2008 financial crisis. Her question created a gregarious wave of feedback to the provocation at the time. She was talking about the empathy that many women seem to exude in decision making as she asked the audience to consider a wider female led leadership approach to global financial vision. Five years later we seem to continually be debating the same topic, but is the focus in the right area? Are women really better at empathising, or are they simply more aware of the need to represent our fellow humans with a level of emotional intelligence that is more inclusive and authentic than the elite clubhouses which we have been created in almost every industry? Clubhouse’s which, today, both male and female leaders are breaking out from in favour of a far more inclusive set of industries in the future.

Here’s the thing… Whilst a socially nurturing role has been placed on and around women for generations, neurologically we are all born with the same ability to empathise, male and female. Evolution has honed our ability to connect with each other and to take the perspectives of others as a survival mechanism and as a success criterion for our shared growth. The fact is we can all empathise but yet we are seeing a 30-year decline in our empathy and the ‘Empathy Gap’ is ever widening causing an array of social issues from loneliness to anxiety, depression and burnout.

The gaps we see today across society and corporate life are not empathetic gaps caused by a lack of empathetic ability in men (or women), but a lack of motivation or understanding for the social need to do so. A lack of consciousness around the benefit of understanding and connecting with those around us. A lack of caring and compassion for our fellow human beings, and our sex has nothing to do with it.

We have reached a point as a global community where the Empathy Gap is changing our ability to see the perspective of each other at extreme levels. From politicians to doctors, CEOs to activists, so many of us are significantly misunderstanding the powerfully impressive role increased empathy could be having on society, our businesses, and our organisations, particularly in a post COVID-19 world. The lack of doing so threatens our social fabric, our corporations, and the future of generations to come.

Whilst there has been some research that points to a small difference in the female and male brains’ speed to activate empathy (women do tend to be slightly faster, instinctively), this is too tiny a gap to make this a poignant issue on a wider social scale.  So, this Women’s Month, as a woman, my plea is to stop segregating us out for a skillset we clearly are not superior at, and to instead focus on spreading humanity’s greatest trait society wide. Let’s close the gap. 50% of us cannot make the changes our world needs, but 100% of us can. With our current health threat, economic uncertainty and societal unrest it’s going to take all of us taking concrete action to demonstrate shared empathy as humans. Not as men or as women. This Women’s Month lets pull the 100% of us together, brothers and sisters aligned.

Mimi Nicklin hosts Empathy for Breakfast, a weekly breakfast show, and a podcast, Secrets of the Gap. She is also a mom and an author, and you can pre-order her debut book, Softening the Edge here. 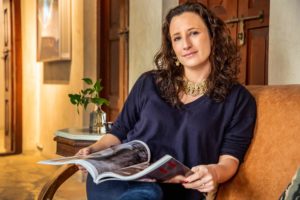