At this critical juncture in the history of our Nation, we have an opportunity to make a massive contribution to the upliftment of all South Africans by embracing diversity and empowering women at levels beyond base targets in the workplace, says Sharon Paterson, Chief Executive Officer of Infiniti Insurance.

We need to ensure women play an equal role in our country’s workplace as a priority. Boosting the workforce with an increased number of women will add significantly to the GDP, among other benefits women bring to the workplace.

Research by Catalyst on ROI shows that companies with a higher percentage of women in executive positions have a 35% higher Return of Equity (ROE), and a 34% higher total return to shareholders, compared to those companies that don’t.

In addition, according to the American Society for Human Resource, increasing gender diversity of leadership teams yields more innovation with women who are better at problem solving while bringing a higher level of trust, more collaboration and better mentoring to an organisation.

We have a huge opportunity in this country to contribute to wealth creation for everyone by embracing diversity and empowering women in the workplace. The Status of Women in the South African Economy study estimated that women contributed approximately R1.3-trillion to the GDP.  By increasing the number of women employed (43.8% in 2018) and upskilling beyond the informal employment sector where the majority work, their contribution to GDP could be doubled. These are positive bottom line facts, criteria used in the metrics mix by investors today the world over.

Gender bias in this country has presented difficulties for women at all levels and the closer you get to the top, the more difficult it becomes…. according to the African Development Bank, with only 17% representation in boardrooms in South Africa. But we are making strides and this movement needs the active support of all leaders.

So, what is holding us back?

Powerfully entrenched beliefs have been identified as the most significant factor. Many companies work hard to eliminate overt discrimination, but women still face the pernicious force of mind-sets that limit opportunity.

Male and female managers continue to take viable female candidates out of the running, often on the assumption that the woman cannot handle certain jobs, while also discharging family obligations. Many women hold limiting beliefs that stand in their own way—such as waiting to fill in more skills or just waiting to be asked.

What is an empowered woman?

What then is an empowered woman? if you google futurefemaleleader.com, you will be told that an empowered woman is someone who knows her strengths and is not afraid to embrace them. To be empowered means to be in control of your life, aware of your capabilities, and ready to take on even your biggest dreams.

The Cambridge dictionary defines empowered as ‘some-one that is confident and in control of their life’.  You are an empowered woman.  What next?

As a wife, a mother and a professional woman – and at different stages of my life and different times during each stage, each of these roles have required prominence over the others and I have had to decide what role should be prioritised and how.  I am only able to take such decisions and ensure that balance is maintained if I am empowered.

Break down that barrier

Many sisters are trapped in economic circumstances that prevent them from even striving for empowerment.  You can leave the man who beats you or the boss that belittles you if you have somewhere to go.  If you have to choose between leaving your children behind or not being able to feed and school them then you have no options, you have no dreams, you have no self- worth.  You are not empowered.  Poverty is the greatest barrier to the empowerment of the women of our nation.  What can we do to break down that barrier?

One small step that we can take is education.  If we can educate the disadvantaged, then we are giving them a tool to use to break out of the cycle of poverty, a tool to use to build up their self-love and self-worth, to become empowered.  For some years now Infiniti has embraced education, providing bursaries for those who cannot afford a good education, both boys and girls, and I urge you to do likewise.  One of those initiatives is Simple to Give.  Go to their website and you will find the Alexandra Education Council.  Any donation that’s made gets a girl child to school and this will ultimately lead to another empowered woman.

To quote from Alice Walker, an Afro-American authoress and Activist in the 1980’s: “The most common way people give up their power is by thinking they don’t have any.”

Know that you are empowered, don’t let anyone tell you otherwise, and make it your life’s mission to empower others. 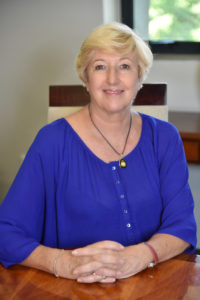