A new global study carried out in 30 countries by Ipsos, in collaboration with the Global Institute for Women’s Leadership at King’s College London , for International Women’s Day (8 March 2022) shows that: 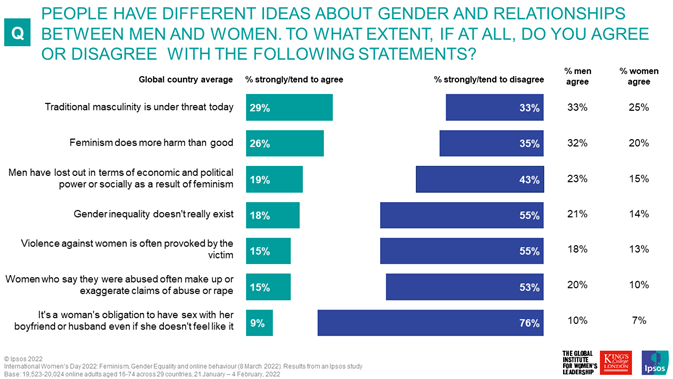 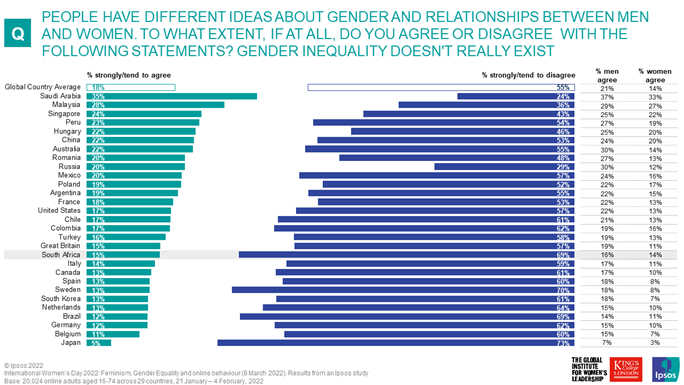 Men are also more likely to be sceptical about the benefits of feminism and to question the existence of gender inequality today:

Victim-blaming attitudes toward violence against women are held by a minority, but only around half disagree outright with victim-blaming statements

But globally a minority expressed concerning views in relation to violence against women: 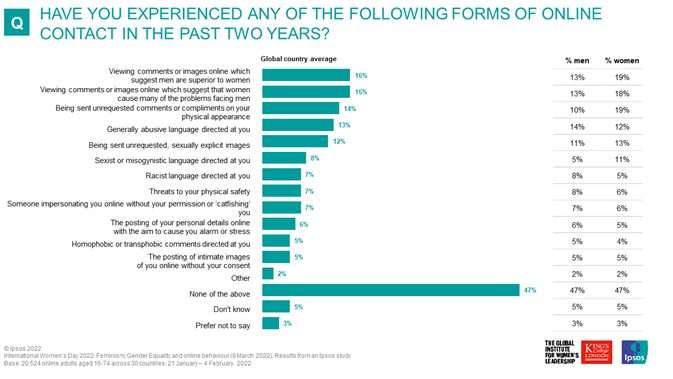 Women also seem to be more impacted by online abuse, as among those who have viewed comments or images online which suggest men are superior to women or that women cause many of the problems facing men, are more likely to report that they have stopped saying what they think online (32% vs 26% of men), experienced lower self-esteem or self-confidence (26% vs 18% of men) and experienced panic attacks, anxiety or stress (18% vs 13% of men) as a result of online abuse. 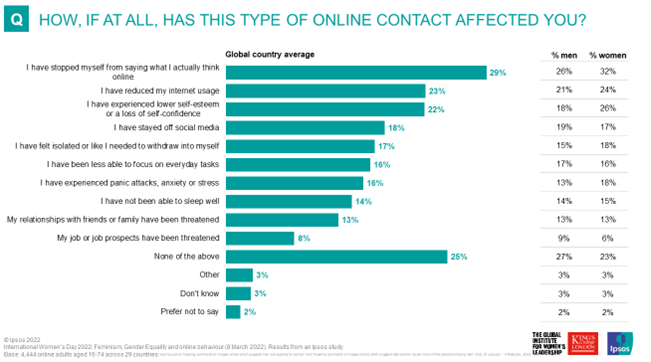 The majority agree that women should not have to put up with online abuse (78% global country average). Eight in every ten (80%) online South Africans also agree that online abuse against women is unacceptable.  Globally, agreement is lower amongst men (74% vs 82% of women) and younger generations (75% of under 50s vs 85% of over 50s). However, people are split as to whether the best way for women to deal with online abuse is to ignore it, with 35% agreeing and 39% disagreeing.

People are slightly more likely to agree than disagree that men are mainly to blame for online abuse (35% agree and 27% disagree). However, people are split on whether many women overreact to things that people send them or say to them online (33% agree and 31% disagree), and agreement is higher amongst men (36% vs 30% of women). 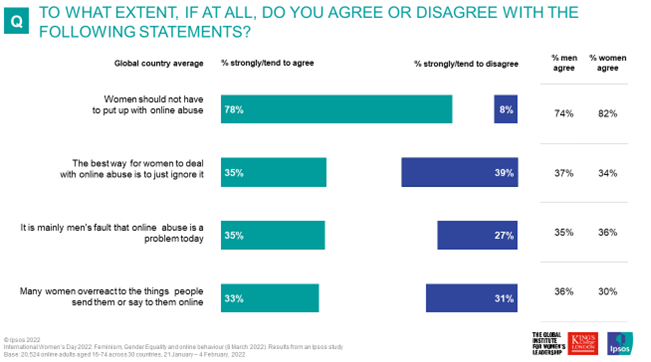 Most think harmful and abusive online behaviour is unacceptable, but acceptability is higher among men, frequent internet users, and younger generations

When asked about various forms of online abuse, the vast majority find them unacceptable. However:

“The prevalence of harmful and misogynistic content online can be seen to both contribute to and reflect wider issues in society regarding sexism, gender inequality, misogyny, patriarchy and gender-based violence. Looking through this lens at some online content it should come as no surprise that there is a call for increased regulation of online content and/or the acceptance of more responsibility for the content carried by online companies.  This is a talking point in many countries, including all over Africa,” said Mari Harris, Knowledge Director of Ipsos Sub-Saharan Africa.